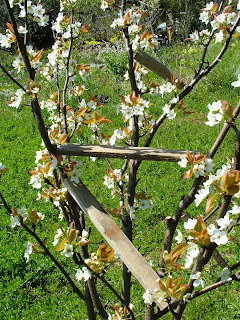 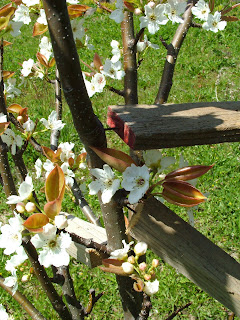 I just got done pruning an Asian pear tree for a friend last week. It’s not easy pruning, or rather, shaping these trees.

Asian pear trees are inclined to sprout new growth that is even more vertical than European pear trees. This tendency to form vertical shoots with a narrow angle of attachment, which makes for a weaker crotch, must be dealt with in the first few months of each season's growth.

Shaping rather than pruning is the way to treat an Asian pear tree. I prefer to spread the young shoots in the early summer to a healthier, and more productive, 45- to 60-degree angle. I use toothpicks to spread the very young shoots once they are ten- to 16-inches long. When the shoots are this young, they are flexible enough to bend to any angle without snapping. I insert one point of a round, wooden toothpick into the new shoot a few inches above its point of origin. Next I bend the shoot out to the desired angle, and insert the other end into the bark of the tree's trunk. By the end of August, I can remove the toothpicks, and the new branch will stay mostly in the position it was trained to by the toothpick.

The tree I was working on last week hadn’t had its stems forced into a 45o angle when it was young. The owners had missed several seasons. However, there are several ways to spread the older, more-stubborn limbs.

Spreaders can be made out of various lengths of one-by stakes with a nail point at both ends. In the photos you'll see that I used some used 1" X 4" pieces of wood. (You can make these by nailing an eight- or ten-penny box nail halfway into the each end and clipping off the nail's head with a wire-clipper.) Insert one nail point into the newer shoot or limb, bend it down to the correct angle, or a bit further, and insert the other nail point into the trunk.(See the left photo.)

A non-intrusive option is to find a nice heavy rock. Tie a sturdy string to the rock, bend the limb down, and tie the string to the limb. You can adjust the angle of the limb by moving the rock toward or away from the tree. With both methods, you'll need to keep the limb bound into the new position for several or more years to allow the branch to stiffen-up enough to hold its own position.

A neighbor filled Styrofoam cups with cement an inserted a wire before the cement hardened. Then the weights were added to the new growth to weight down the limbs to a proper angle.

Once the limbs come into bearing, the weight of each year's fruit is usually heavy enough to spread the limbs without assistance. In fact, the trees are usually prolific enough that too much spreading should be the gardener's concern—the branches break off. Thin the young fruits to a single fruit every five- to eight-inches apart along the limb. Keep an eye on the fruit-laden limbs, as they still may require propping to prevent torn limbs.

To see more detail of the illustration(s) put you cursor over the image and double click.

Note: I somehow lost the usual section "Post a comment". To leave a comment, simply click on the area/button that says "___ Comments". Clicking on the title of a Post under "Blog Archive" also gets you to a view that gives the option of leaving a comment. I hope to figure this out soon. Robert

Visit my web site to learn about my gardening books.

Posted by Robert Kourik at 9:59 PM

Pruning and gardening are both types of art, I say nay to those that deny it. I think that pruning is one of the best ways you could express your orchard if you have one. 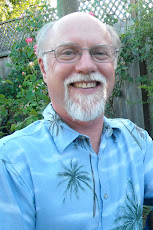